We are currently open and treating patients. We ask that all patients read the following information before attending. Read More

What we are doing...

Your temperature will be taken on arrival.

Screening off our reception desk to keep yourself and reception staff safe whilst making payments.

All consultations will be conducted at a minimum of 2 metres.

Treatment will be conducted with yourself wearing a mask and the therapist wearing a face screen and face mask. Treatment will only be applied to any area where the clinician and patient are safe and not to vulnerable patients.


The door handles and the examination table will be disinfected between each patient. (Doors will remain open wherever possible)

You must not have been in a flight in the last 21 days.

You must arrive in a mask or a scarf to cover your nose and mouth. You can find many examples of how to make a mask yourself on the internet.

Please try to avoid arriving too early for your appointment so as to avoid contact with other patients.

You will be asked to wash your hands before and after treatment.

Do not attend if yourself or a family member are experiencing even very mild symptoms.

Please attend appointments alone where possible. You are of course entitled to a chaperone but please inform us before the appointment if you require this.

Please use the toilet before you arrive as the toilet on site will not be available to patients. 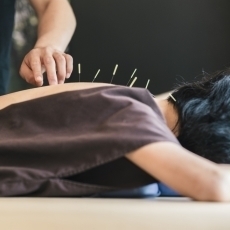 Fibromyalgia can be a debilitating condition which effects millions and according to the American pain society is the most common chronic pain condition in the world. According to the National Fibromyalgia Association, 3-6% of the world's population has fibromyalgia. The main symptoms of fibromyalgia are tenderness and pain throughout the body with extreme tiredness and loss of sleep. About 75%-95% of Fibromyalgia sufferers are women. The exact cause for fibromyalgia is difficult to isolate but there is an agreement on a group of possible causes, some of these include;


Treatments for Fibromyalgia usually include a combination of medication, cognitive behavioural therapy, exercise and Physiotherapy. Here at New Park Physiotherapy our Physiotherapist Alistair has completed a dissertation on fibromyalgia treatment and has subsequently trained in using acupuncture for treating the symptoms of fibromyalgia. Here are some of the ways acupuncture can help sufferers of this debilitating condition.