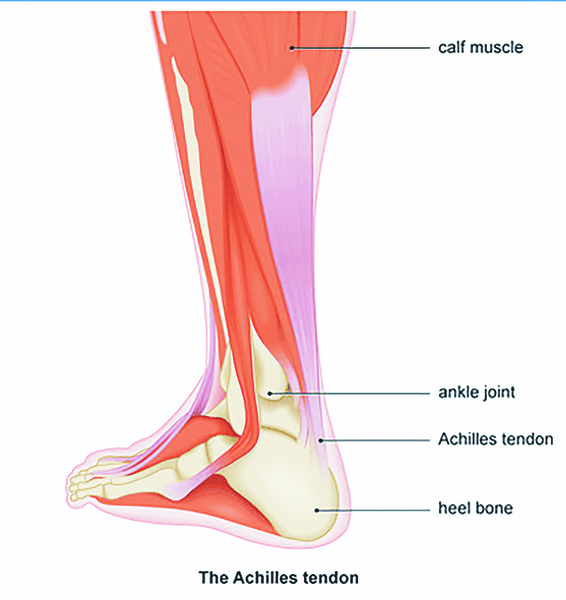 This time of year we often see an increase in patients coming in with pain from their Achilles Tendons. This is usually caused by a sudden increase in activity after Christmas, especially in patients taking up or returning to running. Diagnosing a Tendon Achilles (TA) problem is fairly straight forward and often the patient is already aware of the diagnosis before they arrive. Often the patient describes a deep ache which is worse after activity. They may also notice that the area around the tendon has become swollen or thickened, and in some cases the tendon may 'squeak' or 'pop' during certain movements (crepitus). Understanding what caused the damage to the tendon can me more difficult, often the problem is only on one side and there is no 'mechanism of injury'. Common causes in runners include...

When looking at the causes of TA pain it is important to define the terminology used around the problem. It is inaccurate to refer to the problem as Achilles 'tendonitis'. The 'Itis' referring to inflammation of the tendon. It is in fact the surrounding structures that cause the swelling and inflammation. What can be confirmed by studying images of symptomatic TA's is that there appears to be a breaking down of the tendon tissues caused by adverse stress and degeneration. This then causes scar tissue and excessive collagen fibres to 'bunch' over the damaged areas. Subsequently the tendon is not as smooth and begins to irritate the surrounding tissue which would normally help the tendon glide smoothly. This is why it is referred to as a 'Tendonopathy' rather than tendonitis or tendonosis.

So what can be done? Well, there are multiple treatments available for TA tendonopathy but the best clinical evidence points to the use of exercise to rebuild the integrity and strength of the tendon. Specifically 'Eccentric' strengthening has been proven to help get the patient running again. An eccentric exercise is when a muscle lengthens under load. For example, if you slowly straightened your arm in standing from a bent position your bicep has to lengthen to control the movement. Research has shown that repeatedly lowering your heel off a step can help realign the damaged tendon tissue and improve its tensile strength. Then with steady and progressive loading of the tissue through activities like skipping the tissue can be ready to take the loads associated with running. In cohesion with exercise rehabilitation it is important to assess the patient's foot and ankle biomechanics to check any asymmetric patterns which may cause another flare up of the problem.

If you feel you have some of the symptoms described and can relate to the problems TA pain can cause please feel free to drop us a line and we can discuss how we can help you get back to running again.